A COLLECTION OF ZEITGEIST VIGNETTES

I have now been back from Athens for some time and I thought I'd start sharing a small collection of real stories that capture something of the feeling of post-sovereign Greece. Bear with me as I post these one by one.

As I do whenever I visit Athens, I spent a good deal of my last break at the Pyramids (map), my shisha place in Metaksourgeio, which foreign readers may recall from this. It is owned by an old Egyptian immigrant (one of many that moved with the families back in the days of Nasser) and managed by one of his jovial younger compatriots. I've been visiting for over 10 years - in fact I was on my way back from one of my first visits there when I heard the news about 9/11. Surrounded by brothels, abandoned old homes and the occasional waft of urine-smell, it is a neighbourhood fixture. It has predictably defied our ill-starred smoking ban and I hear it has recently become the setting of a low-budget film.

As I waited for my order of shisha and Sprite with a banker friend, the manager approached and said excitedly:


"They say there's going to be a sweep operation. They'll get rid of all the immigrants except the Egyptians."

I saw the reasoning behind this; the Egyptians had an existing wave of old, very settled and esteemed immigrants to integrate into. The others did not. I told him I was unsure this was the plan anyway; although the centre of Athens is teeming with illegal immigrants, the Government is far from expert at locating them. That's why they're still around in the first place. He was unfazed by my scepticism:


"I hope they get rid of all of them. These Moroccans, these Algerians, they need to go. They're not good."

The manager has generally always felt that the latest arrivals are the worst. Once it was the Iraqis and Kurds fleeing war; now it is the North Africans, flooding in due to the relaxation of visa requirements in Turkey. He's not racist by the way; I remember how back in 2001 he was more than happy to take on an obviously redundant Iraqi employee just to save him from going back into one of our notorious holding pens for illegals.  But he is socially pragmatic. The newest arrivals are always the most desperate, and his part of town is the most desperate place of all. But for this kind of open animosity to be taking root in the immigrant communities of Athens, you know they must be under pressure. 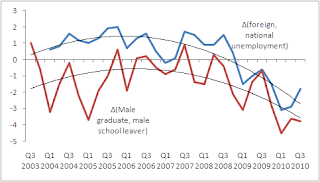 This is where the pressure is coming from. The golden age (such as it was) of immigrant labour in Greece was 2005, and you can read a very good review of how well that was working out (by one of my old professors no less) here. As new private sector jobs, especially in construction, dwindled, the gap in employment between immigrants and Greeks (for whom public sector jobs are effectively reserved) reversed and has been widening rapidly. The immigrants of Metaksourgeio were heavily dependent on contruction jobs: in the past when giving us directions some used to employ the Greek word δουλειά (work) to denote a construction site. It really was that simple.

Speaking of Egypt, my original shisha place was not the Pyramids but Ramses, which another Egyptian immigrant, Ahmed, co-owned with his rotund Cretan wife. I never wanted to leave Ramses but Ahmed gave it up and returned to his more lucrative venture of satellite dish installations (and possibly internet cafes with shisha?) to escape what he saw as a 'bad crowd' - male prostitutes, drug addicts, beggars, the lot. Ahmed was a very frank and endlessly engaging conversationalist, a university-educated horticulturalist and man of the world. His tales of Egypt (which he still visited) were sad but mostly angry. He once said to me:

"In Egypt, I can go to a square in the middle of any city and shout: 'f*** the Prophet, f*** the Book', and as long as I remember to add 'God preserve President Mubarak and his sons' no one will touch me."

I wonder what he makes of events these days. It seems to me that the Egyptians of Athens will happily jig on Mubarak's grave. On the other hand, and contrary to the Pyramids tip, it turns out new arrivals from Egypt are not that welcome. To be fair, there were no signs of an uprising back in January - not to my untrained foreign eye but not to many other people's eyes either. The possibility of a new wave of Egyptian immigrants simply didn't come up.

Email ThisBlogThis!Share to TwitterShare to FacebookShare to Pinterest
Labels: Me