Did you know who the hardest-working Europeans are? Go on, guess. It's the Greeks. Crazy right? Don't you feel bad for thinking they were lazy until now?

Three times already I've looked into this subject (here and here and here), and three times the story has turned out to be fatally flawed; yet with each year's 'Weekly Hours Worked' release from Eurostat a new batch of clickbait articles pop up tantalising the few people left who haven't yet been exposed to this supposed mythbuster with some variation of 'you'll never guess who the hardest-working Europeans are!'

If you feel vindicated by such articles against unfair stereotypes of supposedly lazy Greeks, I can't blame you. A proper look at (appropriate) data confirms that we are not lazy. But if you actually take these articles at face value, you have been woefully misled. You've also missed out on an opportunity to understand the Greek labour market in more detail. The only lazy people here are content mills like Statista.

The latest iteration - 2013 working hours and the Independent

This time, the story made it into the Independent, after trickling down from other outlets (see here and the original, here), until the Greek edition of Vice ended up covering the story under the headline 'should we be proud that Greeks work the longest hours in Europe?' The Vice_Gr story featured an interview with one Mr. Poupkos, Youth Secretary of the Greek tertiary Union, who is actually not an entirely unreasonable guy - however, on this occasion his commentary focused on curbing illegal overtime and unpaid work; reading the stats and the interview together, one might be excused for thinking that the reason Greeks work so much more than other Europeans is because of unscrupulous bosses (of which, I do not dispute, we have no shortage).

In fact, the truth is very, very different. Comparing like for like, Greeks don't work insane hours at all. But the Greek labour market itself is deeply, structurally unhealthy - and the whopping working hours total is merely a statistical artifact of its structural defects. To understand why this is, you have to understand what figures these publications are quoting, how they compare across countries, and what drives them.

About the hours worked data

All three of these datasets are compiled by Eurostat on the basis of the Labour Force Survey, which is carried out across the EU, and you can see in minute detail how these were defined up to 2013 here. LFS is the same survey we rely on for employment and unemployment figures, and is carried out pretty uniformly across the EU member states. If you see anyone referring to OECD hours worked figures, like Statista does, note that these too are sourced from the LFS when it comes to EU countries. For non-EU countries, the data sources can vary, and the implications of such variation can be very significant, so country figures are not comparable (as the OECD duly points out). For some reason, Statista's figures seem to be aligned to 'usual' as opposed to 'actual' hours worked,  even though they cite 'actual' hours worked data as the source. The effect is to slightly overestimate the actual time worked by Greek employees - citing 42 hours per week in people's first jobs, as opposed to the 'actual' figure of 40.3. Adding people with second jobs yields an 'actual' figure of 41.2 hours a week (see here).

These hours are self-reported by individual respondents -not employers, as the LFS is a household survey. They include overtime but not lunch breaks or travel to and from work. They are not unduly seasonal, as they incorporate four quarterly measurements, with multiple survey waves per quarter. 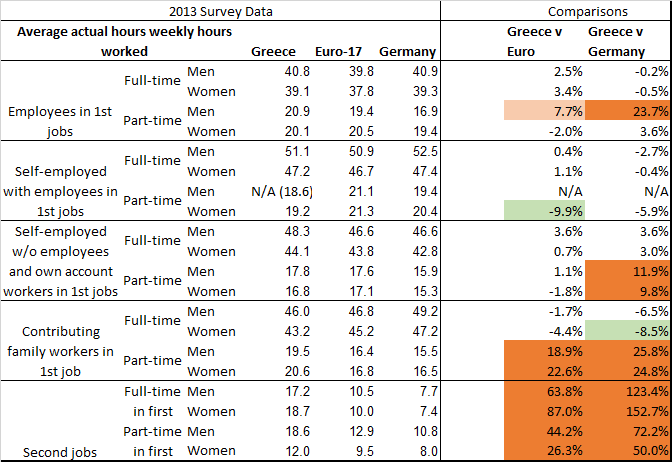 So the contribution of unscrupulous bosses to hours worked in Greece is very limited, and the bosses in question are most likely to be business owners employing their own families, employers of second-jobbers (who are, presumably neutral with regards to whether their employees have another job but prefer more qualified candidates), and employers unable to offer their staff full hours, who end up employing people part-time when everyone would prefer a full-time arrangement.

Using usual v. actual hours worked where possible doesn't change the big picture, although it does tend to amplify the differences between Greece and other countries. 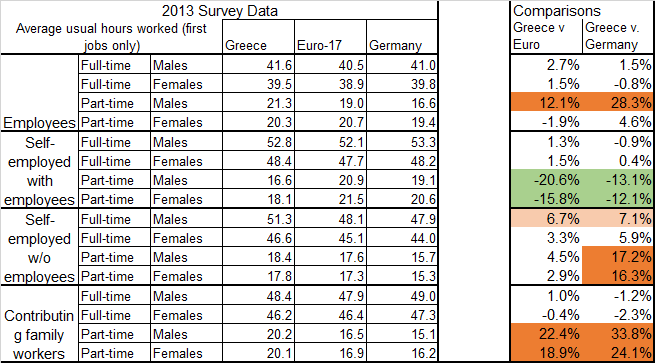 Note that the discrepancy that is so obvious when one looks at hours worked carries over to other areas of work that are far less documented - holidays, sick leave, retirement age, the lot. The self-employed and family workers, for instance, take fewer days off and retire later, if at all.

So what accounts for the huge discrepancy in total hours worked, if not unscrupulous employers or workaholic Greeks? The structure of the labour market, that's what.

Simply put, Greece has fewer part-time employees* (less than half the EU average despite an upward trend); fewer economically active women (a participation rate ca. 12% lower than the EU average); more self-employed people (including the 25.4% of our workforce who are own-account workers, v. 10.8% EU-wide and the 6.6% who are employers, v. 4.3% EU wide); more contributing family workers (three times the EU average); but not more people with second jobs - in fact, the share of employed people with second jobs (deduced from here and here) peaked at 3.4% in 2009, 10% lower than the EU average, then fell to 1.8%, or less than half the EU average, by 2013; as might be expected when jobs are in short supply.

So the question of 'why do Greeks work so many hours', put in its proper context, becomes one of why we have so many unproductive family businesses, why there are so many own-account workers in our workforce, why our workplaces find it so hard to accommodate part-time workers, and why we can't get more women into the labour market. Not all of these are necessarily problems, but they are structural characteristics of the Greek economy. Changing them requires that magical catch-all phrase, 'structural reforms.'

The usual counterarguments offered to the kinds of crude working hours  statistics provided by the Indepedent are a) yes, but productivity is lower b) yes but it is possible to spend hours at work without doing much c) yes but it's possible to work very hard producing products/services that no-one wants. All three are roughly, though not exactly, equivalent, and all three generally lead back to the structural questions raised above.

Since these objections are prompted by a discussion of hours worked, the obvious point of departure in comparisons of productivity is output per hour worked. As you can see here, the Greek economy produced about a quarter less per hour worked than the EU as a whole, even after accounting for our lower purchasing power.

However, this tells us very little about Greek workers themselves: individuals are not 'productive' as such, because labour is only one factor of production. The productivity of labour is a function of many things, including private and public capital. So while it is meaningful to ask how many hours the average Greek works, it is pointless to ask how productive he/she is and attribute this to him/her as a personal characteristic. To do that, we need to ask a different set of questions altogether, and there are two alternatives.

We can measure the quality of labour used by the Greek economy and its stock of human capital; or how much of its output cannot be explained by inputs such as hours worked and capital employed alone. Each question is methodologically fraught but attempts have been made to answer them.

With regards to human capital, sources such as the WEF's Human Capital Report, the WEF's World Competitiveness Report or the UN's Human Development Index are not terribly helpful because they include too many labour market outcomes in their calculations - what we're looking to capture are inputs, such as skills, motivation, resilience and self-discipline, and they only include education inputs up to a point. The best use one can put them to is in measuring the quantity and quality of education - where you'll find that Greeks do well for quantity but less so for quality - and even then a lot of the lag in quality comes in after one enters the job market - which is an employer's fault at least as much as it is the employee's.

One can also draw on social psychology research, and particularly comparative studies focusing on the Big Five personality traits, to measure some intrinsic qualities that make up the profile of a hard-working personality - conscientiousness in particular is a trait known to correlate strongly with work performance, and which fits the kind of attitudes involved in the 'hard working Greeks' theme. One comparison finds that Greeks score reasonably well and there is little difference in this regard between Greeks and Germans; in another, we score slightly higher. Similarly, the OECD PISA comparisons of perseverance and motivation among pupils show that Greek pupils do really quite well (check the data here, there is too much to summarise).

TFP calculations are problematic because they require detailed data on the various factors of production (including different kinds of capital), which the Greek authorities do not produce regularly. Both the OECD and EU-KLEMS projects include no TFP calculations for Greece, although EU KLEMS provided enough data for others to fill in the blanks. We now know, for instance, that Greek TFP did not rise from 1999 to 2007, nor indeed did TFP in any PIIGS country, or in Belgium for that matter (but see here too for the opposite finding). Greek TFP was also losing ground against other developed countries from the early 80s onwards, possibly even the 60s, and continued to lose ground throughout the early part of the crisis.

But TFP figures us nothing about the attributes of Greek employees - only that they appear to be saddled with crap technologies (in the broad sense) of production. Indeed, TFP is a residual - the measure of our ignorance.