WE CAN HAZ MIDDLE CLASS?

While browsing through a friend's Facebook feed the other day, I was infuriated to read the following passage in a hideously simplistic NYT op/ed:
Which do you prefer: a world in which 5 percent of the population accumulates 95 percent of wealth and the rest remain poor and excluded or a world dominated by a vast, growing and politically powerful middle class? Europe still strives to achieve this second scenario.
Now I have a great deal to say about this ridiculous steamroller treatment of the subject ('Did you hate G.W. Bush? Then you will love the European Commission!) but this really isn't the place for it. However, this got me thinking: if the European project is about the rise of the middle class (which it isn't), what of the Greek middle class? How will it fare in these difficult times? I really think the op/ed might be on to something in saying that the current crisis is threatening the dominion of the European middle class, but the subject is strangely elusive.
What is this middle class? As sociologists point out, the middle-class is distinguished by its values more than its income or assets – these values lead people into middle-class occupations which tend to pay middle-class wages and lead to the accumulation of middle-class wealth.
In Greece as in much of the world, middle-class values include an emphasis on home ownership; professional or managerial status; self-improvement and socialisation through higher education; an experience of the wider world through the media, travel and politics; and childrearing at a relatively mature age.
Putting a number to this definition is nearly impossible so I will try to triangulate as follows:
Economics
35% of the Greek labour force are currently in professional, technical or clerical office occupations (source) against 43% of the European labour force (source). 37.7% of Greeks would pick one of the two middle points in a six point range of financial difficulty to describe their personal and family circumstances. (source). 32% of Greeks can afford one major holiday per year without any problems, against 41% of EU citizens. (source)
Values
56% of working age adults in Greece have a positive view of the liberal professions (architects, lawyers, etc) vs. 58% in the EU (source). 35% of Greeks say they 'frequently' discuss national politics with their friends, against an EU average of 19%. 31% express a high level of interest in politics against an EU average of 14% (see pp. 3-6 here). 38% of Greeks say they are aware or very aware of their rights as European citizens , against a European average of 32% (see p. 13 here)
Ask Greeks to define poverty and you will find that, perhaps more than any other nation in Europe, we think of poverty as the inability to participate in society rather than the lack of goods or reliance on public subsidies (see here). 35% of the Greek population identify with this essentially middle-class way of looking at the world, v. 24% of the EU population.
Risk
As of 2001, 38% of Greek employees thought of their jobs as being very secure, against 28% in the EU (source). It's amazing how rare statistics on this are, mind you. If any readers have more recent stats from a large sample I'd love to reproduce them here.
To cut a long story short, my point here is that about a third of Greece's working-age population is middle-class under a broad definition. Greece has a small middle class by European standards if judged by economic standards alone, but it has a large one in terms of the prevalence of middle-class values. But is our middle class going to get bigger or smaller? I think I've got an idea.
Having middle-class values is a matter of education and family background. What makes the middle-class life possible, however, is the relative absence of risk to one's livelihood. Without this, values begin to change to match the reality on the ground. Living the middle-class dream requires the near-certainty that one will have a decent-paying job at any given moment for one's entire working life. There's only so many factors that can produce this, so let's consider them one by one:
A short working life: On average Greeks retired at about the same age as other Europeans for most of the past decade – although according to Eurostat we started off with higher exit ages and eventually converged. These figures are, of course a little problematic because they are not weighted by the value of each retiree's pension. Going forward, the parlous state of our pension fund finances means that retirement ages will rise, putting pressure on the middle class.
High productivity growth: EU KLEMS reveals that we achieved this through most the 70s and noughties, but both cases were exceptional and suspicious – we spend a good deal of the 70s with low debt and no elected government and the noughties were, as we now know, a public sector debt bubble. Going forward, it is possible that regulatory reform will deliver some measure of productivity growth, but estimates point to an incremental gain comparable to a single year's productivity growth, so that's unlikely to give us much of a boost. Essentially, this one could go either way for the middle classes, depending on the pace of reform. 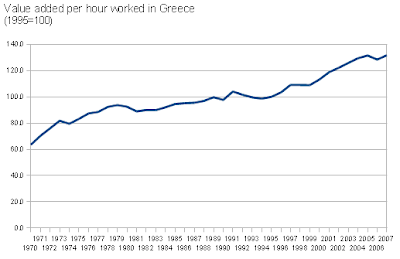 High fertility rates: Contrary to popular perceptions, Eurostat reports that fertility rates have been on the rise in Greece since the turn of the century. Of course it can be argued that 'true' Greeks are not contributing to this trend as much as immigrants are, but unless said immigrants plan to leave the country and take their kids with them, we're better off counting them towards the total. If Greece can manage its intellectual capital properly and invest in public goods with strong externalities, such as education, the middle class should benefit. 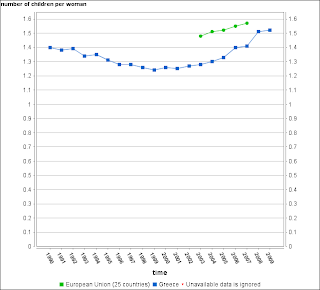 The existence of commercial monopolies: Commercial monopolies, including by state-owned corporations, can create permanence by creating barriers to entry not to a profession but to entire sector. See for instance our incredibly thick coal-loving engineers. With increased privatisation these should also begin to disappear.
Barriers to entry into certain professional occupations: We have had many of these in the past, as the OECD's data show. However, we are now in the process of tearing these down.
Strong labour market regulation and high levels of unionisation: We have had both for many years and, as I have discussed, they are particularly focused on erecting barriers to entry. Our latest batch of reforms aimed at relaxing the stranglehold of collective bargaining could reduce this.
Income redistribution: I doubt this has contributed to the growth of our middle classes, or if it has it has fuelled the growth of an upper middle class. On the spending side, our public spending apparatus has throughout the last decades been one of the least efficient in the developed world at narrowing income inequalities. On the income side, middle income taxpayers are the least effective tax avoiders and evaders in Greece. With the public finances in trouble, we will not be able to waste money, but then we also won't be able to redistribute very well, which bodes ill for the middle classes. Unless of course we manage to tackle tax-avoidance, which has a very strong effect on income distribution.
So there you have it. Our middle classes have been built mostly on labour regulation that is in the process of being dismantled. A new middle class could rise if we can drive productivity gains and battle tax avoidance quickly enough, but the pressure against our existing middle class is irresistible. The shape of Greek society will change radically depending on how well we reform.
[To be continued].
LOLed by Manos at 00:19