U CAN HAZ LOST DECADE!

Readers may have guessed by now that most of my method in preparing this blog consists mainly of three things: 1. scanning my regular newsletters from the World Bank, the IMF, the OECD and other eee-vil New World Order organisations for interesting research papers, 2. going through the latest updates on Eurostat and ELStat looking for juicy new data, and 3. going to Google Scholar, and putting random economics-related phrases into Google Scholar's Advanced Search, filtering for papers released in the last year that mention Greece. It is literally that simple to maintain an amateur economics blog, although I'm not saying it's also easy. These tales have a way of growing with the telling and it can be hard to know where to finish.

Anyway, in my latest dive into Google Scholar, I dug out a paper that truly surprised me. Gogos et al (2012) sets out to prove that over the period of 1979 to 2001 the Greek economy fit all of the technical criteria for a great depression. In their own words, ‘to be a great depression, a negative deviation of real per capita GDP from trend […] must satisfy three conditions: 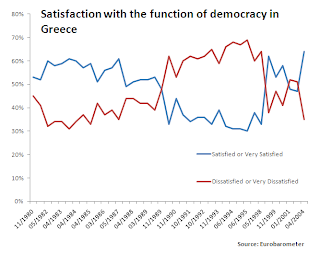 I must admit, this struck me as a very bold statement. I have discussed the economic policies of 1981-89 before here and readers will know I am not a fan, but I wouldn't have dreamt of saying that real output per capita fell over that period: many in Greece still recall this fondly as the only time in living memory when politicians actually did what they are supposed to do (i.e. dole out cash to their clientele). 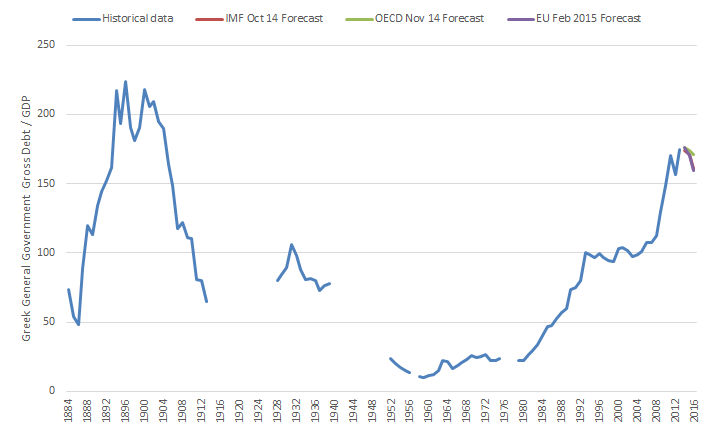 I know three things about the Greek 80s. First, that people were generally more satisfied with the function of democracy in Greece during this period than at any time prior to (briefly) 1999 or 2004. Participation in elections was also high, and remained so until 1992. Second, Greece's
public debt exploded at a rate we have only seen again after 2008. And third, as Pseudoerasmus has shown, Greece's per capita GDP diverged from both the Eurozone core and the Eurozone periphery (as they would later become). But a depression? Really? 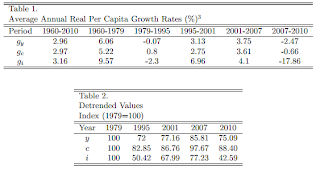 Yet it's hard to argue with the evidence, as presented by Gogos et al, and which I reproduce on the right.  Essentially, the entire period of 1979-91 was one long episode of stagnation during which the Greek economy performed very poorly. Recall that y is GDP, c is consumption and i are interest rates. 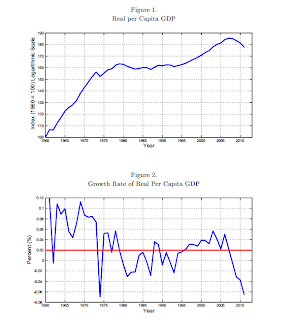 Importantly, Gogos et al suggest that the slowdown between 79 and 91 was not really a matter of policy (otherwise it would have started in 81, I should think) but rather a matter of demographics. Without sustained investment in human capital, falling population growth tends to reduce long-run economic growth too. Between 1960 and 1975, the growth rate of the Greek population collapsed, as a result of a drop in fertility rates starting in 1955, falling by about half in 60-65 compared to ten years earlier (data here). In 1955, first birth age in Greece bottomed out at 24 (an age largely unheard of today), possibly as a result of the increase in female education in the country - a good thing, by all accounts.

Except for that fact that, 19 to 26  years later, when that cohort of new labourers was set to enter the labour market, output per capita stopped growing. Unfortunately, the Greek governments of the time decided to spend prodigious amounts of money in the teeth of a demographic mega-trend. Bad idea.

Could this have been predicted at the time? Possibly, if it weren't for the Greek state's long history of ignoring population statistics. 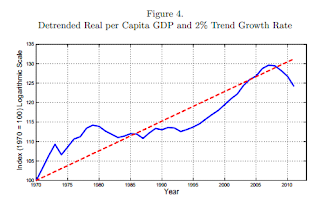 While it's given me some excellent food for thought, I also have some reservations about this paper. First of all, the idea that economic performance must be benchmarked against some supposed 'trend' output (see right, and also here for a smug self-congratulatory discussion), is absurd to me. At best, it assumes that there is an intrinsic value to human and physical capital that is relatively stable through time, and was moreover priced correctly in the reference period used to calibrate the model. Not to mention the assumption that economy-wide production functions are laws of nature, varying in their parameters but not in their essence. This industrial-revolution-era thinking should have been abandoned long ago but somehow it still persists.

Second, to disaggregate growth into what is attributable to inputs and what is attributable to Total Factor Productivity (see right below) is all right when the emphasis is on the role of the individual inputs, but it's plain daft when it ends up emphasising the role of TFP itself. Like dark matter or dark energy in the calculation of the mass of the universe, TFP is a residual and hence it's not an insight to be celebrated. We don't know what it is, only that it doesn't behave in any manner our model can account for. There's no call for an 'aha' moment when it turns out to be the dominant force. It's like celebrating how small the R-square value of a regression is.

Finally, while I cannot find any better figures anywhere, I am a little worried about taking dictatorship-era national statistics at face value, and it is these that set the trend for later decades. The Greek junta was exceptional in that it was one of relatively few dictatorships in recent history that achieved growth rates higher than the democratic governments that succeeded them; in fact, growth rates were surprisingly high by any standards. Moreover, unlike the longer-lived Spanish and Portuguese dictatorships of the 20th century, the Greek junta pursued significant levels of welfare spending, though unsurprisingly it was less generous when it came to education (discussion here). I have yet to find any better data though, so I'll accept what I have for now. 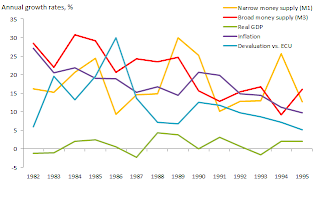 What's also very interesting about Greece's lost decade, of course, is how all of the remedies offered to Greece's current woes (fiscal and monetary stimulus, as well as devaluation) were tried during this lost decade and failed spectacularly. The chart to the right demonstrates quite how little these remedies worked. (Money supply data here; real gdp data here; inflation data here; exchange rate data here).

'Surely though,' some of the newly contrite Socialist voters of the 80s will say, the Change was a valuable project to entrench equality in the country? I'm not sure about that. A quick dive into the OECD's database will show you what happened in that regard. Sure, the after-tax income distribution among workers was much more equitable in the mid-1980s compared to the mid-70s, but this trend continued almost unbroken till the crisis struck, under different policies, with perhaps a little hiccup in the late 90s. But the real change was among retirees - the legacy of the Change was primarily a false equality of pension income through massive redistribution to the old.