DON'T TAKE THE BAIT, ALEX! THEY ARE MASTER BAITERS!

Last week I spent some time looking into the argument, first made by Alex Andreou in response to populist stereotypes propagated by foreign journalists and politicians, that Greeks work longer hours than the citizens of almost any other developed country. Alex’s post, Democracy v. Mythology, has travelled around the world and it’s encouraging to see that people are willing to stand up to slander with facts rather than Yo-mama-nomics. However, I was not entirely sure Alex's facts stacked up. So I checked.
I found, as readers will recall, that relying on the OECD figures is actually not very useful, and that once we adjust for self-employment (the unregulated labour market that does not reflect the Greeks’ political choices), prevalence of part-time work (which is rare in Greece and which the OECD just lumps in with full time work) and differences in the methods of data collection (LFS based methods like ours tend to give the highest estimates of hours worked), most of the difference is whittled away until we end up working respectable but not ridiculous hours. The rest is down to lower productivity, which we have to work extra hard to make up for. The point is well made that Greeks are not lazy, although we are frankly uncompetitive.
But I think it’s worth examining another claim made in this riotously popular post as it is highly misleading and could convince some of our fellow citizens that one policy area in terrible need of reform is actually viable – even though this is probably not Alex’s intention. Again, I must stress that Alex’s fact-based argumentation is refreshing and desperately needed: more people should adopt his rejection of sensationalism and racism. But in serving this purpose he keeps taking the bait of populist and sensationalist idiots in Europe and further afield, which means he ends up rebutting arguments that never really mattered and that more serious critics in Europe have never fixated on.
Still, if we examine the figures in detail, their story is fascinating and can sometimes be other than what it appears.
Countermyth: Greeks retire no sooner, if not much later, than other Europeans
The sensational claim against the Greeks making the rounds in some parts of Europe is that we retire at ridiculously early ages. True, some of us do but this is not the case in general. Alex demolishes this claim by demonstrating that the average Greek pensioner left the labour market later than his or her counterpart in most European states. Cudos to Alex for digging up the data and clarifying that point, but there’s a problem in his reasoning and it is inevitable when one is trying to out-stat moron journalists – he’s stepped into their idiotically framed argument and now his shoes are caked in shit.
You see, how late in life people retire is utterly beside the point. What matters is how long their working lives are, which in turn determines how big their retirement pot is (ok, whatever notional retirement pot they have in pay-as-you-go systems). Sensationalist politicians and journalists abroad (and some at home) might care about the retirement age but the real argument (and the question Greeks should be asking first and foremost) is whether or not we Greeks were running a sustainable pension system. You see, Amaryllis, who retired at 70 but joined the labour market at 35, may look on (news)paper like she’s been dealt a shit hand by the pension system compared to Gertha, who retired at 65 but joined at 25, but in fact for the purposes of pension scheme viability Gertha is a more viable ‘client’.
In reality, it is the labour market that dealt Amaryllis a shit hand, and the Greek labour market has been shaped by Greek politics (i.e. the will of the people), giving us the most inflexible labour market in the developed world. But let’s check the pensions numbers first.
***THE EUROSTAT LINKS BELOW WERE NOT WORKING PROPERLY EARLIER. I BELIEVE I'VE FIXED THIS NOW***


In 2006, when Eurostat last collated the numbers on length of working lives across Europe, those Greeks who were still working after they had started receiving retirement benefits had on average worked for 29.9 years – the lowest number in Europe bar none (source). This ranking holds regardless of whether people worked to afford themselves a basic income or for personal reasons unrelated to money. Only one category of working pensioners in Greece had a working life behind them comparable to the EU average: the people that kept working despite having more or less enough to live on, simply because they wanted to top up their income and live more comfortably (source). And these guys had worked longer working lives than either of the other two groups.
But what of the people who were no longer working and living only on retirement benefits? Well they had spent an average of 34.6 years working. Of all the European countries, only a handful boasted shorter working lives (source), and these included fellow PIIG Spain, fellow Greeks Cyprus, and of course Romania, Bulgaria and Poland. 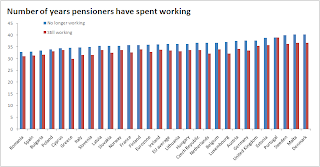 So you see, Alex, it is possible for both you and idiot Greek-bashing journalists or politicians to be wrong. Greeks work shorter working lives; hence the state cannot afford their pensions as well as other countries can. Or if it can afford those, it can’t afford their prolonged education before or their prolonged spells of unemployment during. No mythology, just pure math.
NOTE: As some trolls find it impossible to check official statistics for themselves, I should like to provide four pieces of advice.

1. click on the source links. It's way easier than making a washing machine, so even I can do it. The 2006 study is an ad-hoc module of Eurostat's Labour Force Survey - the collated dataset made up of the individual labour force surveys that we get, say, our unemployment statistics from; I know it's not as good as your anecdotal evidence based on a small sample of acquaintances, friends and relatives but it is the best I have access to, or that anyone else has access to for that matter. Check with someone of a nationality that you trust if you don't believe me.

2. If you need trade statistics that are up to date, go to an official source, not a random website. And remember to read the 'about us' section before you decide what is or is not a government website. As a rule you can tell a gov't website because they carry all manner of insignia showing which ministry or investment programme they are funded by.

3. if you don't know where the data come from or what they mean then perhaps you should look up the answers. For a start, I would look at Eurostat's metadata for the 2006 study.  If that won't do, try the full evaluation report. Don't like the findings? Write to Eurostat and demand a correction.

4. read the article again just to make sure you've understood what I'm saying before vomiting your tedious thoughts onto my comments section.

I guess all of the above shows just how hard it is not to take the bait.
LOLed by Manos at 14:09