In recent days a number of blogs are reposting a well-conceived but incomplete mythbusting exercise about Greece. I've most recently come across it in @panos101 's blog here, but the original source is Alex Andreou's celebrated post in sturdyblog. What follows is an elaboration on my comments in response. See also my post on the retirement statistics here.

The point of the exercise I take it is to disprove pejorative stereotypes of a siesta nation by demonstrating just how hard the Greeks actually work. The money shot is the OECD working hours statistics: at 2,120 hours per person, the Greeks blow everyone but the Koreans out of the water, working our knuckles to the bone. Take that, Merkel!

...except, there are several catches. But first, let us enjoy the music:

The first catch has to do with the contribution of the self-employed.

Toggle from total employed to dependent workers only (i.e. employees), and the average goes down to 1,777, which is still a very decent amount of work but hardly the triumphant show-stopper some might have hoped for. And it actually says pretty much what we knew; that in Greece the employed have it a hell of a lot better than the self-employed (that's business owners and freelancers, but also our small army of 'contractors' who are simply the thralls of rogue employers). Now these guys work like f***ing dogs. Consider that at the end of 2009 they made up about 36% of the workforce and yet adding them to the total increases the average working day by about a quarter. A calculation based on Q4 2009 figures tells me the average self-employed person worked over 2,700 hours a year or 53.5% more hours than the average employed person; these people account for 46% of all the hours worked in Greece. Adjust for this and you'll find that, instead of working 53% more than the Germans our proletariat end up working 35% more. Still a lot by the way. But it goes to show that the real graft in Greece takes place outside the cushy reality of employment regulation and that's nothing to brag about.

The second catch has to do with part-time employment, which our unions have declared war on from the get-go. You see the OECD figures actually lump part-time and full time employees together without any adjustment so countries with a larger percentage of part-time employees will tend to have fewer average hours to show for it. As this OECD table will show you, part-time employment is very rare in Greece. To take the example most likely to raise eyebrows, 22% of German workers work part-time against 8% in Greece, based on a common definition of part-time work to ensure comparability. Bearing in mind on top of this that according to Eurostat the average part time worker works 48% of the hours of a full time worker in Greece and 44% in Germany (source), the discrepancy between German and Greek part-time employment artificially adds about 8% to the working hours of the average Greek vis a vis the average German.

The third and biggest catch is that the data reported by the OECD are simply not comparable between countries even with our little adjustments in place. The OECD warns, in its metadata:

So the OECD are not happy for people to cite comparisons. But surely, you may object, the differences can't be that vast! Well, elsewhere the OECD says:


For several EU countries, the estimates are made by the OECD using results from the Spring European Labour Force Survey. The results reflect a single observation in the year and the survey data have to be supplemented by information from other sources for hours not worked due to public holidays and annual paid leave. Annual working hours reported for the remaining countries are provided by national statistical offices and are estimated using the best available sources. The data are intended for comparisons of trends over time and are not fully suitable for inter-country comparisons because of differences in their sources and other uncertainties about their international comparability.

I think we're all getting the gist of this by now. But there is more: an international review of labour statistics by the US Bureau of Labor Statistics found that LFS-based measures of hours worked, like the one we use, tend to provide consistently higher estimates of hours worked than other measures, probably because they are more accurate. How do they put it...

You see data on hours worked are rarely published on a standalone basis (and few people actually notice them when they are) but are rather used to inform labour productivity estimates at the European and international levels. If anything, ELSTAT has an incentive to present the Greek economy as an ever more productive one in order to attract FDI and so on, so the thing to do is to deflate rather than inflate the number of hours worked in order to make it look like we're working smarter, not harder. Whether they have enough latitude to do so I don’t know but there’s certainly no incentive to inflate the figures.

This last point also explains why people like the OECD and Eurostat actually tolerate such large discrepancies in the measurement of data; in model-driven productivity estimates that single out Total Factor Productivity from other inputs, all that matters is the rate at which hours worked increase, not their absolute number. So as long as our hours total is internally consistent, the OECD and Eurostat are not too bothered about reinventing the wheel of Greek labour statistics.

Perhaps a better way of approaching this is to check whether hours worked increased or decreased in Greece over the last decade. I think most people's intuition is that they increased sharply but actually they did not, because productivity has grown instead. Hours are down 2.3% for employees (see below) but flat for the total workforce, which means the self-employed have been working harder. Simply put, the employment relationship, whose rules we the Greek people control through the law, is not much less favourable in terms of hours worked than in other countries, and it's getting better. It is what happens outside of the world of regulated work that increases our collective working hours. 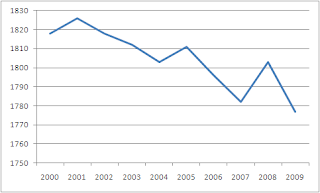 Mind you, going by these figures alone the numbers still say in the clearest of ways that, say what you want of the country, the Greek people are not lazy. Good. That will come in handy when we default. They're not very productive either because, let's face it, if you bust your ass making products and services people won't pay for you can work your hands to the bone and it still won't make a difference. But that's another day's blogging, isn't it?
LOLed by Manos at 00:24